The AK47 was made by tank crewman Mikhail Kalashnikov in effort to end the "Great Patriotic War" (WW2) with a German inspired sturmgewehr (German:assault rifle) and it's prototype and production variants. The AK 47 would be evaluated by the Soviet Military Bureaucrats, and would enter full production by 1949. People may say that the AK47 was the greatest assault rifle ever made. However the AK47 was still revolutionary with a detachable magazine and rotating bolt, in which there were not enough speciality tools, such as molds and mills became more complex than the SKS rifle. The AK47 would enter service in 1950, but there were more SKS's and other WW2 weapons in Soviet infantry units. The standard AK for the Soviet army would be the cheaper AKM by 1960.

Immediately known to those who don't even know firearms the AK47 is use across the world for good and bad alike, nearly impossible to disable this gun only stops when she's out of ammo!. When a western journalist asked a Russian gunsmith what an AK47 is, the man did not know as no such name exists. It is to say AK is the 7.62 military rifle while the numbers 74 actually have a meaning such as "model 1974". In the Izhevsk museum it is simply labeled Автомат Калашникова.

despite being the most well known assault rifle, it was actually the AKM and the T56 that made the name AK47 known to the world

The Union of Soviet Socialist Republic

The AK47 was meant to be a replacement of all Soviet small arms, in this case mostly the PPSH. The Soviets and Russian news media says that the AK is a Submachinegun. However the AK47, like the AKM is only effective to a maximum of 300 meters, even though sources claim that the first generation 7.62x39 was not purposely made to be destabilized in flight to "create bigger wounds". In fact the recoil and the High speed camera sourced from the "Discovery Wings Channel, Top Ten military rifles, #1 AK47" shown that the entire gas tube and barrel was moving and bending per shot. However the rifle was simple, it was crude, it withstood the elements.

In Soviet Russia, Cost is you! For Soviet inventor, literally U.S. pennies. 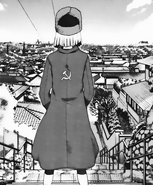 Gee, I wonder who this is.

AK47 as she appears in te manga.