Edit
watch 01:36
We're Getting Mutants in the MCU - The Loop
Do you like this video?
Play Sound
Bakemono

A grotesque supernatural being that haunts the middle school dormitory at Seishou Academy, its true nature, intentions and name (this article's name is a placeholder of sorts) are currently unknown.

Much like many bizarre aparitions in Japanese folklore, this creature can shapeshift into people (it impersonated CETME Modelo L), or a few other terrifying forms. Its preferred appearance seems to that of a gigantic banded spider that has human arms and a head grafted to i's body. Althought it manifested itself as a physical being that seemed to suffer damage from gunfire, it has been observed to move through walls and other solid objects with ease. 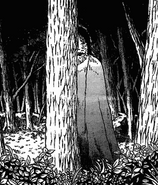