As one of the Armalite sisters she resembles M16  but with a different haircut, her hair and girly appearance maybe a shout-out to the M4 being called the barbie doll for men . she also has 3 pins on her left sleeve(dono what they are for maybe their the pins on the M4). she has frills on or under her skirt, her uniform is also slightly different from the rest of the middle schoolers . she wears sport shoes like 16 but wears shorter socks. The PALS webbing sewn on her back may indicate her being a modular rifle(although they weren't shown when she was battling FNC).

She may also wear G-String adjustable-width panties, like T91 since she also has an adjustable telescopic stock. Her hairclip is a hamburger, it may be a reference to america's favorite food and its popularity worldwide in fast food chains, much like herself as she is popular in many Armies worldwide, Much to the chagrin of her sisters she is the most popular version of the AR-15.

Carefree, much like the rest of the Armalite family, Very agile , hyper and is Vice president of the Student council, she is M16's blood related sister but they don't get along very well,they may even have a rivalry going on like the Marine corps and The Army(atleast on the internet), she also seems to hates it when people don't call her by her full name(designation).

T91 - that fellow member of the student councel

M14 -Has probably the Same relationship M14 has with M16

M16A4 - her blood sister(or her mother/parent rifle lol) they really don't get along,they may have a rivalry going on like the marine corps and the army

A Carbine version of the M16A2.

The M4 carbine was developed from various outgrowths of these designs, including a number of 14.5-inch (368 mm)-barreled A1 style carbines. The XM4 (Colt Model 727) started its trials in the mid-1980s, with a barrel of 14.5 inches (370 mm). Officially adopted as a replacement for the M3 (and the M92F and M16A2 for select troops) in 1994, it was used with great success in the Balkans and in more recent conflicts, including the Afghanistan and Iraq theaters. The M4 carbine has a three-round burst firing mode, while the M4A1 carbine fires fully automatic . Both have a Picatinny rail on the upper receiver, allowing the carry handle/rear sight assembly to be replaced with other sighting devices.

The United Kingdom, British S.A.S, the AR15 type rifles replaced the SA80 series because of the rifles reliability issues, The L85 is too fragile and needs a lot of maintenance so is unsuitable for the type of work that the SAS are engaged in.

Philippines: M4/M4A1s sold as a 2008 Foreign Military Sales package.Two variants of the M4 carbine are made by Floro International Corporation, consisting of the M4A1 5.56mm Rifle and the M4A1 Model-C 5.56mm Rifle. The Philippines ordered 63,000 R4 rifles from Remington Arms; these are to be used by the Philippine Army and the Philippine Marine Corps and Philippine P.A.S.O.C.

even Israel. Sold as part of a January 2001 Foreign Military Sales package to Israel.

Used by Rebels in the middle east post 2001 probably stolen.

There are also Chinese copies.

Japan: M4A1s as part of a 2008 Foreign Military Sales package.M4A1 SOPMOD rifles are in use by the Japanese Special Forces Group

The M4 performs superb in urban environments and structure interiors to Dense Jungles. Lighter weight and shorter barrel length makes it a quick target acquisition gun. however the M4 still suffers the flaws of the M16 chamber design, and being Inferior to the M16 in range, stopping power, and usage in hand 2 hand combat, The M4 Also has lower muzzle velocities and louder reports because of having a shorter barrel, and the parts are more stressed than that of an M16 because of the M4 having a shorter gas system,also the M4 has a tendency to overheat faster than an M16 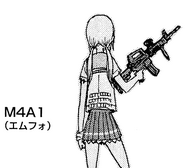 M4 as she appears in volume 4's afterword. Notice the PALS webbing sewn in the back of her uniform. 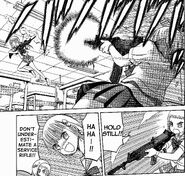 M16 and M4A1 arguing
Add a photo to this gallery

Retrieved from "https://ak-scans.fandom.com/wiki/Colt_M4A1?oldid=21744"
Community content is available under CC-BY-SA unless otherwise noted.