Much like France in the middle of a fire fight this rifle is nowhere to be seen. Maybe. Fitting to the meme no one is actually sure if we've seen FAMAS in the Upotte!! anime or manga yet.

The author had this character in his doujin, but the character ended up being introduced in Chapter 49.

Posing as a regular human foreign exchange student at St. Nicholaus Girls highschool, she seems to be discreetly cooperating with undercover law enforcement agent "Ren" in a fight against rising Yakuza syndicates. Deeper motives for her stay in Japan in such capacity are unkown as of now.

A quiet loner, seems to be unaware of the aloof and unaproachable perception her schoolmates have of her, until she is approached by classmate Wakaayu Ikome.

Muh blond drills or curler pressed cornrows or whatever the Japanese think as "Western Nobility" (Victorian Era). Loner personality. Has a friend. 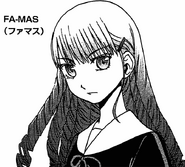 FA-MAS from the compiled volume afterword 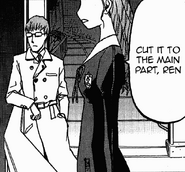 How it has changed the series so far[]

The year of our lord were 1980's. The french were getting tired of their old ass Mas49/56's rifles and MAT-49 submachineguns from the 1950's and postwar colonization era (How did that all go?). So they sort of were "inspired" by the AUG, because at the time countries that were not involved in any serious wars were all about "Muh dismount times".

"B-but that's wrong", well yeah the FAMAS were also a design project started in 1952 that were rather unproductive. Well not until the AUG came out, which made the Government of France all russled because "Muh Idea, muh pride", the FAMAS project began it's first major production of the FAMAS F1 rifle 1975. So they had the FAMAS, a 5.56 bullpup with a 25 round magazine. Because the 30 round stanmag were too mainstream.

The FAMAS were Reliable and rugged on the surface, which is almost not a trait thought about with a Bullpup.

One thing though, 900-1000 Rounds a minute. 1100-1200 Rounds a minute, G2. Ohshitnigger you have a higher rate of fire than the M16, did you even know what happened during Vietnam, again? With a Famas G2 you are going to practically lose a whole magazine in 6.6666 seconds on full auto. That is why it also has a burst setting.