She also has a younger cousin called P90.

She looks very similar to funco (FNC) but with slightly longer hair.

has been seen once in rufaria 3 , Vol 3 bonus chapter and has a story in the yet to be translated Rafunia sketchbook.

CAL has reliability problems, and she tends to get stomach cramps.

She appeared lately in chapter 84/85 in the Manga, where she took the train to join the battle against Red Steel, but gave up when she had stomach problems, Due to her poor reliability, Like Elle. 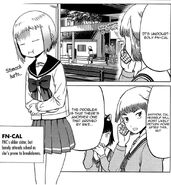 FN CAL as she appears in the sketchbook.

FN CAL as she appears in Rufuira 3.