IMI Galil AR, Galil AR for short or just Galil, is an Israeli assault rifle active since the early 70s

Galil, for being mostly based on the AK design, features a set of fox ears and a short fluffy tail. Her skin is lightly tanned, and she has average height. Her eyes are orange-golden and she has long slate-blue hair tied in twin tails. Her upper canine teeth are fang-like, and Galil wears normal middle-schooler uniform of Seishou Academy with the ribbon tied in a different style.. As seen on the beach, given her skeletal stock, she wears a black thong one-piece swimsuit.

She is most of the time a light headed and kind girl, and isn't very delicate sometimes. She behaves very childlike, and is attached to AR18, treating her like a mother, possibly because she saved her from the bottom of a lake. However, when it's necessary, she becomes extremely serious, which can surprise some.

She is also fond of RK 95, and dislikes M16A4, maybe because she replaced Galil as standard service rifle. Galil doesn't speak very often, but when she does so it is very colloquial.

After the Six Day War, Israel saw that they couldn't rely on the FN FAL rifle, since it would "perform poorly on the desert environment" and the length would "impede the mechanized APC dismount time record". At the same time everyone else was starting to use the cheaper 5.56x45 and they saw how well the AK-47 rifles behaved, so they decided it was time to create a proper assault rifle for themselves. Even though the FAL in the open field desert enviroment helped them win that war.

In the late 60s Israel Galili (born Israel Balashnikov) and Yaacov Lior's Galil, based on the RK 62, competed against the M16A1, the Stoner 63, the AK-47, the HK33 and a design from Uziel Gal. The tests mostly revolved around performing in arid conditions, and Galil was a clear winner. She was chosen as the standard issue assault rifle, and was issued in three 5.56 mm NATO variants: the standard Galil AR, the Galil SAR, which is a shortened version of Galil, and the Galil ARM, a squad support weapon that featured a wooden handguard for better cooling, a bipod with a wire cutting function, a bottle opener on the handguard, and a carrying handle. There are also 7.62 mm NATO variants of the Galil AR and ARM, a sniper variant of the 7.62 ARM known as the Galatz, and more recently a more compact Galil MAR, the Micro Galil.

By the end of the First Lebanon War, the Galil was replaced by the M16A2 rifle, which was issued in large quantities by the US, along with the CAR-15. However, she is still used by the IDF and other nations.

Galil is also used by several other nations, mostly in South America, Africa and Asia, south east asia one of the standard weapons of the Philippine army, along with the American M16

The operation is identical to the Kalashnikov design, but the AK-47 parts cannot be used in the Galil. Galil fires in a closed-bolt position and is gas operated without an adjustable regulator. Galil features a receiver based on the Valmet M62, but has a slightly different shape. Along with the Kalashnikov-style selector switch, it also has a smaller switch on the left side of the receiver, above the pistol grip. The charging handle is bent upwards for ambidextrous use. Galil has a front hooded post sight, mounted on the gas block, and a rear flip-up sight with settings for 300 and 500 meters. It also has folding tritium night sights set for 100 meters.

Galil's stock is similar to FN FAL's, but is made of tubular steel, which adds some weight. The stock has no button latch, in order to not confound the user. The handguard is made of high-endurance polymer, with a sharp bottom flare in order to prevent the hand from slipping. Galil can use a special 12-round magazine in order to fire rifle grenades. She also has a bayonet mount, which accepts the M7 bayonet issued for the M16.

In the US, the Galil starts at a $1500 mark, being quite pricey. She also has semi automatic variants, and a US-produced Golani. 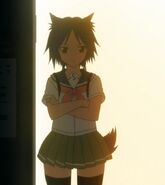 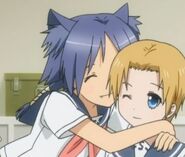 A loco Galil, with RK 95 in the foreground 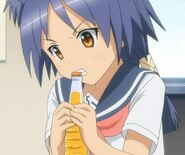 The Galil AR isn't issued with a bottle opener. But Galil does what she pleases

Galil and Sako, during the tournament 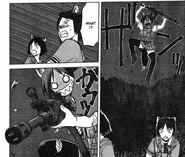 Her name is Galil she is Smilin' I said OH NO

Galil without the twintails