"If you got time to grumble, then how about you turn that heavy ass of yours towards the enemy. It'll make for good cover."

This Finnish 9 mm submachine gun is not just acting cool, she was born cool. A SMG who likes cold pizza and Ray-Ban Aviator glasses, and just does not give a damn. According to some, she is also foul-mouthed and apparently goes commando (she has no stock).

No one ever uses her real name, and instead she is called "Cobra" after the character she is a parody of, namely, Marion Cobrette - the protagonist of the Sylvester Stallone's movie Cobra which made Jatimatic famous.

Jatimatic is almost never seen without her sunglasses. It appears that she only takes them off when she is bathing, and, much to everyone's shock and surprise, she is actually quite beautiful.

The Jatimatic is a Finnish 9 mm submachine gun developed in the late 1970s and early 1980s by Jali Timari. The submachine gun made its debut in 1983. The Jatimatic was manufactured in very limited numbers (approx. 400) initially by Tampereen Asepaja Oy of Tampere and later Oy Golden Gun Ltd (as the GG-95 PDW, re-introduced unsuccessfully in 1995). The firearm was designed primarily for police, security forces and armored vehicle crews. It was never adopted into service by the Finnish Defence Forces, although the later GG-95 PDW version was tested by the FDF in the 1990s; the conclusion of the tests was that the GG-95 was not suitable as a service weapon.

The gun, designed as a stakeout gun for easy hiding in civilian clothing, quickly gained a criminal reputation, when a batch of 22 pieces was stolen from the workshop in 1984. The manufacturing license of the shop, Tampereen Asepaja, was revoked, and no pieces are produced anymore. The firearm can be seen in the 1984 movie Red Dawn used by Strelnikov as he hunted down the brothers near the end of the movie. In the 1986 film Cobra, it is wielded by Sylvester Stallone. It is also notably used as the primary weapon of a fictional DC Comic vigilante Wild Dog.

The left exterior surface of the bolt is engraved with a visual warning sign labeled "FIRE", which is visible through the ejection port when the weapon is cocked (the bolt is moved to the rear position).

Reloading the weapon involves charging the folding vertical forward grip, which is simultaneously the cocking handle. The grip is deployed and locked forward with a spring latch and then charged to the rear and guided back forward in order to chamber a round. The forward grip does not reciprocate with the bolt during firing and also acts as a safety mechanism in the stowed (folded) position, immobilizing the bolt in either its forward or rear positions by using a lug on the grip to engage and recess into a notch in the bolt. This allows the weapon to be carried safely either loaded or unloaded and provides a drop safety feature. 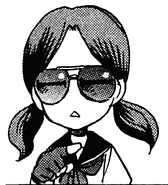 Cobra as she appears in the manga.

Cobra minus the aviators.

Jatimatic as a gun.
Add a photo to this gallery

Retrieved from "https://ak-scans.fandom.com/wiki/Jatimatic?oldid=24672"
Community content is available under CC-BY-SA unless otherwise noted.