The /ak/ Wiki
Register
Don't have an account?
Sign In
Advertisement
in: Characters, Assault Rifles, Seishou Academy, Other affiliations

Edit
watch 01:36
We're Getting Mutants in the MCU - The Loop
Do you like this video?
Play Sound
SAKO RK 95 TP

The most noticeable feature on Sako is her elf ears, the authors decision to give her these was based on the fact that she hailed from Finland, which he said reminded him of elves when he imagined the place. Sako wears the standard Seishou Academy top with her ribbon tied in an alternate way as compared to the rest of the students (besides Galil, they were both transfer students), along with high-top combat boots and a longer than usual skirt, which is believed to be from her old school. She wears a white sunflower in her hair, and has a single braid on the left side, her hair is also very long. She has red eyes, and most of the time wears a very serious look. Sako is noticeably taller than all the other girls at her school, which is a feature meant to display physical dominance.

Speculation (feel free to shoot me down over this):

Two of the three oddities of Sako's appearance (her height and her different skirt) seem to be references to her appearing as the rechambered export "transfer student" model.  Her skirt is wrong for a 5.56 middle schooler both in length and colour, but is visually similar to those of the high schoolers, which she would have been in her original 7.62 format.  Her noticeably taller build could also result to this, and there is an established precedent for almost exactly this effect with G3's youngest sister. 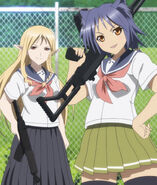 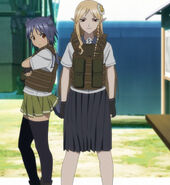 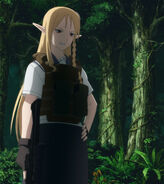 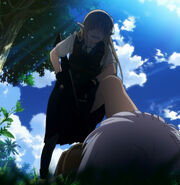 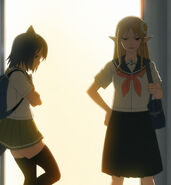 Is driven to be the 'alpha' of any school she attends.

In the Anime, Sako only returns (somehow) to fight back the AKs in the finale because there were only three protagonists fighting instead of the student body (18 and Galil were already taken out to build tension).

Sako is also the only elf in the series (both anime and manga), this is a fact.

The 7.62mm RK 95 TP (TP boiling down to "folding-stock",this is reference for finnish word "taittoperä") is used by the Finnish Defense Forces, but has not completely replaced the older RK 62 due to a severely limited production run.

She is also sold in civilian models as the M95 under the company name "Valmet", various departures from the original rifle include fixed stock, rechamber in 5.56mm and the removal of fully automatic fire.

She is called the "best AK" by those who are familiar with her.  She has great advantages in her native climate, where many other rifles struggle because of the cold and thick forests.  Build quality is exceptional and she remains accurate over several hundred metres.  Accuracy and penetration through scrub are far worse with the 5.56mm export variant.