A Swiss assault rifle attending the middle-school of Seisho academy. One of the four main characters in both manga and anime. Also a member of the T-back alliance implied but never shown (at least not yet)

Black hair and blue eyes. At first her hair was shoulder long and tied up in a bun covered by white fabric. After her bun got shot off by Sako, she wore her now short hair open with two purple hair-clips on each side. Upotte Nano chapter 12 indicates that she grew it back during her absence/repair after the Atami incident.

A honour student from a wealthy family that exceeds at both sports and studies. Her long-range shooting skills are able to compete with the high-schoolers/battle rifles. She clearly states her likes and dislikes an is, especially after loosing her hair-bun, quite spontaneous. Seems to admire G3-senpai and shows affection toward Funko, even more so in the anime. 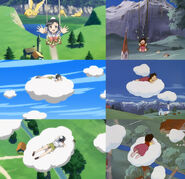 Sig's Gun iaido. Her catchphrase is a nod to Ishikawa Goemon from Lupin II, 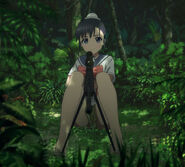 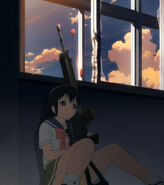 The Sig 550 is one of few rifles that can work durig below freezing tempitures. When used with it's own domestic swiss ammuntion, it can be a formitable marksmen rifle.

Quality has its price. SIG/Swiss Arms produces semi-automatic versions for all variants of the SG55x rifle series.

In Switzerland: A new rifle costs between 2600 and 3000 Swiss Francs, (which is in actually in the same price-range as most other .223/5,56x45mm rifles on the Swiss market) while used privatised ones (former military ones with the full-auto feature removed) are about 1500 Swiss Francs.

In USA: Only a few rifles were imported before the AWB, so they're an expensive collectors item. SIG Exeter offers a domestic variant, the SG556, but it doesn't reach the quality of the Swiss original. (Like most domestic versions of European Firearms)

In Canada: Inhabitants of Frosty Moe Land can get the real-deal for about 3000 CAD

Believe it or not, a few terrorist organizations do use the SIG 556, but rarely do because of its high price. (Thank you Counter Strike)