Often called "Fountain head" much to her displeasure by M16 because of her multiple ponytails Her trademark six-pigtail hairstyle is likely a reference to the 205th armory insignia T91's manufacturer.

In the anime she uses a G-String adjustable-width panties, referring to her adjustable telescopic stock 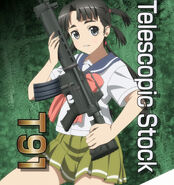 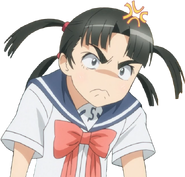 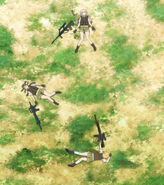 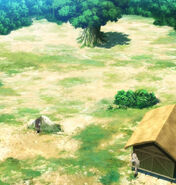 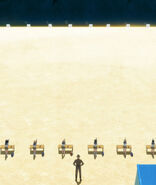 She is always seen with AUG as they are good friends and both members of the Seishou student council, with T91 being the Student council Treasurer.

She is very supportive of AUG in her endeavors to be in lesbians with FNC, and will do her best to make sure she keeps a cool head and embarrassment to a minimum. She also have a habit of saying ~Ne at the end of her statements, which may be more of how the native Japanese interpret how native Chinese speak Japanese.

T91 appears to like cooking as well as when she is thinking of preparing snacks she thinks about how to work around AUG's dislikes in order to cook something for the both of them.

The main rifle of the Taiwanese Army was the tried and true T65. Although this was a great rifle and served the Taiwanese army well, they wanted to move to a rifle that was more modern, reliable in harsh environments, and could be used in the growing conflicts that evolved close quarters combat. Thus the 205th Armory was tasked with creating a new weapon for the Taiwanese Army.

The first rifle they designed went through many trials with many different features, including case-less ammunition before reaching what was designated the T86 rifle. This rifle saw small deployment in the Taiwanese Army even though it was expected to be mass deployed like the M4 carbine.

After several years of testing the rifle was fine tuned and the feedback used to make what is now known as the T91. This rifle was extremely well received and used for everything from guard duty to front line combat. The T91 is now in the process of replacing all T65 and T86 rifles.

The T91 is notably shorter than an M16A4 or its predecessor, the T65A2, giving this rifle much greater maneuverability and aim down sight ability whilst sacrificing accuracy and long range capabilities.

There are a few key differences between the T91 and an M4A1. The biggest difference is these two rifles is the operating system, with the M4A1 being direct impingement and the T91 being a piston driven system. This means that since the T91 has the gas moving the piston which moves the bolt carrier group instead of the gas directly moving the bolt carrier group. This comes in handy for when the rifle is suppressed as you will have less gas blow-back from operation of the rifle while suppressed.

Another key difference between the rifles is the T91's lack of a forward assist. With the T91's greater reliability from its piston driven system it was decided that the T91 did not need a forward assist for operation in any environment.

Overall the T91 is comparable to the M4A1 carbine, as a smaller more mobile weapon that is more handy for soldiers to use than the T65A2.

While out right purchasing a T91 is not an option as the full rifle is not exported, there is an option to put together your own T91 if you live in the States. Wolf imports an A1 upper that is a T91 spec upper with an actual T91 charging handle and hand guard.

If you want a completely authentic T91 instead of just mating the upper to any old lower then you will need the following parts:

All of these parts will give you a fully authentic looking T91 in a military configuration.