Nogami Takeshi ( 野上 武志) is the best mangaka to ever grace /ak/ with his presence. This ARTIST, this CADILLAC OF MAN is well know for his love of cute girls doing cute military things with some occasional heavy eroticism. He's also infamous for his sloppy research, but his constant /k/-trivia mistakes are charming in their own way. This phenomenon became know as "Nogami Nogamied" among the fans. In Girls und Panzer, Nogami was in charge of design for Ducks (except Noriko), Hippos (except Caesar) and Anteaters, he also designed the characters of the anime created by the cast of Shirobako. When working, he uses his playmo collection as drawing references. Models were mostly given to him by fans because he doesn't know how to make them. His favourite tank is Japanese Type 74.

Also, some of the self-published stuff (like Strike Witches doujins) has Engrish added to the bubbles by Nogami himself.

Ankou-team through the eyes of The Master. 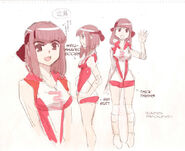 Lots of thought are always put into character designs.

Popular with the ladies.
Add a photo to this gallery
Retrieved from "https://ak-scans.fandom.com/wiki/Takeshi_Nogami?oldid=24359"
Community content is available under CC-BY-SA unless otherwise noted.