"Aim for the shell ejection port"

The Elephant during the Finals were in an urban combat scenario and maneuvered like any other heavy tank, even though they work best as gun carriers and are actually very slow.

The Porsche Tiger Chassis were too complicated, and somewhat flawed with pretty bad power to weight with only a 10 cylinder inline engine. But that did not mean it were completely unnecessary, as Ferdinand Porsche was still needed by how the Germans and it's allies fared against the Eastern and Italian front. But Porsche's idea of having a "better" heavy tank than the Henschel&Son's Tiger I were a fixed Pak 43 8.8 L/70 gun, mounted on a revised Porsche Tiger chassis with engine located in the center, with the radio/bow gunner and driver separate from the gunner and loader. Even though crude, the Ferdinand Tank Destroyer was still the first dedicated heavy tank destroyer in the war. The difference of the Ferdinand and the Elephant were that there were a bow gun added because infantry were known to overrun them with frontal charges. Later Tanks and gun carriers like the smaller cheaper and also deadly PanzerIII/IV hybrid Nashorn, newer Tiger II tank, and Jadpanther V Tank destroyer would have the same Kwk 43 gun, making the Elephant redundant.

Elephants were mostly used in the Eastern front, as well as Pak 43 guns because Soviet tanks and heavy tanks were more of a threat than the Western Allied war machine which at the time were still venerable against Pak 38's and kwk 38 guns and lighter Panzer III's. There were one incident in Italy that an Elephant got mobility killed in the track frontally by what some say was a 3 inch gun from a M10 tank destroyer, which also showed one of it's major combat limitations of the design because the tank were a fixed gun carrier and not a turret. That same tank that were a combat lost in Italy ended up being placed in the United States Armory Ordinance Museum. The Elephant tank had the best armored unit K/D ratio of any armored vehicle in the German military at the time. 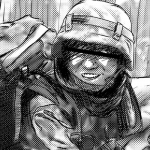